Some people think it’s a freak accident when merchandise in a retail store falls on a customer or worker, but this type of incident is more common than you would expect. “Court documents from a suit filed against Wal-Mart reveal that the store had more than 17,000 falling-merchandise incidents between 1989 and 1994. Records from a lawsuit against Home Depot show that a few years ago that store received 185 injury claims per week, though most, they say, were minor.” ABC News, 20/20, March 16, 2018, Potential Hazards of Warehouse Stores.

Falling merchandise incidents are often caused by negligent stocking practices and lack of safety precautions. Stores may place heavy items on high shelves or may stack heavy items so that they can fall and injure unwary and unsuspecting customers. Stores may stack items higher than reasonable, allowing displays to topple into aisles and onto passing customers.
For example, this photo was taken in a K-Mart on Limestone Road in Wilmington, Delaware: 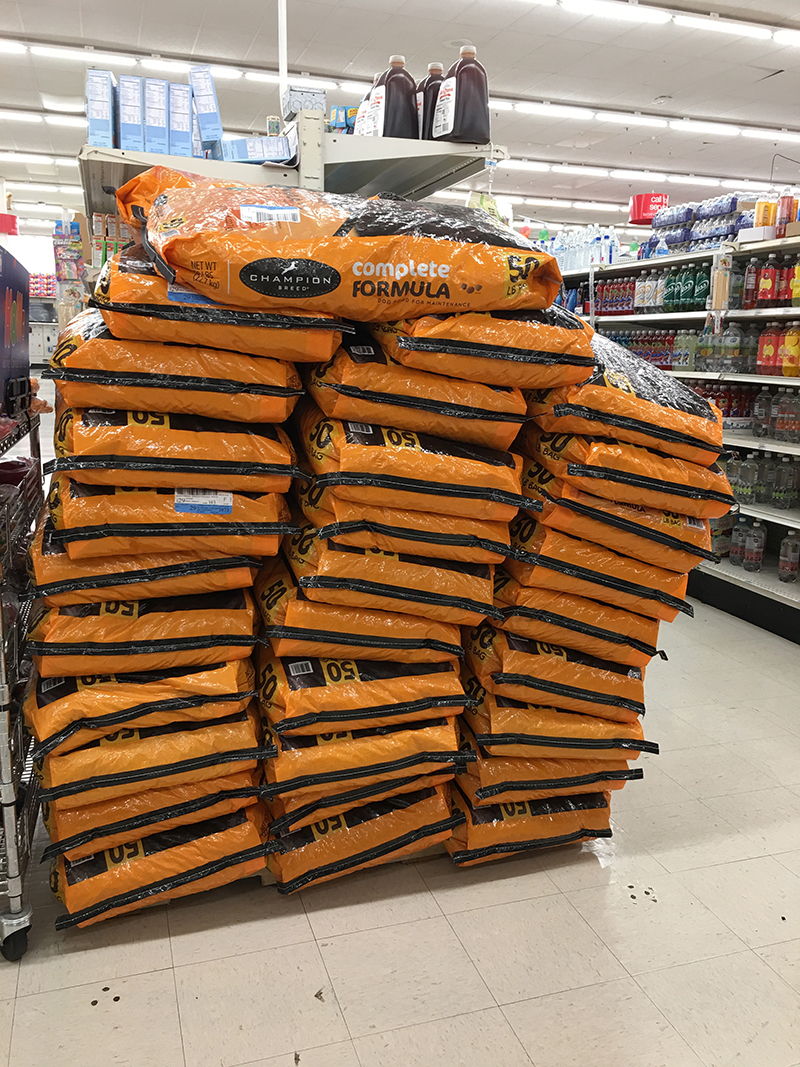 The photo shows thirty 50-pound bags of dog food stacked high on a pallet in a makeshift end cap display. The display is shifting to the right side. The bag on top is about six feet off the ground and is just about ready to slide off.
The injuries that result from falling merchandise incidents can be truly catastrophic. The following are some of the outcomes that can occur when negligent store practices allow merchandise to fall:

-Paralysis. Falling merchandise can cause severe trauma to the brain, spinal cord, and nerves in the human body, resulting in partial or full paralysis of arms and legs also known as paraplegia or quadriplegia.

-Death. Falling merchandise can cause death as a result of crush injuries, brain and spinal cord trauma, and blunt force trauma.

Five Things to Do if You Were Injured by Falling Merchandise:
If you or a family member was victimized by the negligence of a retail store that allowed its merchandise to fall or topple over, there are five important steps you should take as soon as possible to preserve your legal rights:
1. First, if you are able, take pictures or video of the merchandise and the area it fell from. The more pictures and videos you take the better. The pictures may turn out to be your best evidence to show that the store negligently stocked the merchandise and failed to take reasonable precautions to avoid injuring its patrons.
2. Note the names of store employees who make statements after the incident. Clients often tell us that a store employee said something like “I told the manager that was going to happen if we did it that way” or “that’s the second time that happened this week”. It’s always a good idea to get the name of an employee that said something helpful to the case. Write it down. Give it to your attorney.
3. Notify the MOD. MOD stands for Manager on Duty. If you were involved in a falling merchandise incident, you should notify the MOD before leaving the store. If you can’t notify the MOD, notify a store employee. Takedown the name of the person you notified. Otherwise, you may help the store, the store’s insurance company, and the store’s insurance company’s lawyers by letting them argue that the incident never really happened.
4. Ask the store’s insurance company whether there is “med pay” to your hospital and medical expenses. The store’s insurance company will probably call you to try to get more information about your incident and your injuries. We generally advise folks not to give a tape-recorded statement to the insurance company without an attorney present to represent you. With that said, you can and should ask the insurance company if the store carried “med pay” that can be used to pay your medical expenses resulting from the incident. If so, get the claim number and address where bills are to be sent and provide that info to your hospitals, doctors, and other medical treatment providers.
5. Finally, and in our view most importantly, GET A QUALIFIED LAWYER ON THE CASE AS SOON AS POSSIBLE! The most important time in a falling merchandise case is right at the beginning. In our falling merchandise cases, when we are contacted early on, we do things like go to the store to view and photograph the display and get notice into the Store Manager’s hands advising them to preserve evidence such as photos and videos of the incident. This can make a huge difference in whether you win or lose your case.