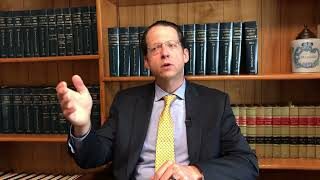 Does Joel Embiid Have A Right To Sue In A Workers’ Compensation Case? Personal Injury Attorney Ben Schwartz helps to a viewer with this question.

Today we are going to answer a question from Reggie in New Castle County, Delaware. Essentially to sum it up, Joel Embiid plays for the Philadelphia 76ers and sustained an injury where he got a concussion and fractured the orbital bone which is the bone basically around the eye socket that holds your eye in place. Reggie asked when you are playing in the NBA and you sustain an injury, is that a workers’ compensation case?

So, if you are a player in the NBA or the NFL or major league baseball or whatever, if you sustain an injury while you are in one of your games, you would have the right to pursue a workers’ compensation case. You would pursue that workers’ compensation case in the city and the state where your team is located. So if you are on the 76ers in Philadelphia, you would be contacting a Pennsylvania workers’ comp attorney in or around Philadelphia, and there is plenty of them, but that is where you go. That is what you would do in order to make that claim.

Now in that claim, you would have the right to get your medical treatment paid for. You would have the right to get partial recovery of your lost wages. If you are, you know getting millions of dollars a year because you play professional sports you are not likely to get millions of dollars a year in lost wages through a workers’ compensation claim alone, because as far as I am aware all states cap the amount that you can get in terms of lost wages within a worker’s comp claim.

There are other things and you know each state has a different workers’ compensation law or a different workers’ compensation scheme. And what you are entitled to is going to vary from state to state. but my point is if you are injured as an athlete, you need to contact an attorney in the state where your team is located where you are you know quote unquote employed, and get a free consultation with an attorney to learn your rights.

So, send me those questions. I am attorney Ben Schwartz. My email address is ben.schwartz@schwartzandachwartz.com.

Dog Injured In Car Accident...Who Should Pay Vet Bills? Delaware Personal Injury Attorney Ben Schwartz may not have the answer, but he can explain how your auto insurance works and pays for a human person after they have been in a car accident. https://youtu.be/FjI25XY9fpE   Hey Folks, I’m...

END_OF_DOCUMENT_TOKEN_TO_BE_REPLACED

How Much Does It Cost To Hire A Personal Injury Lawyer?

Personal Injury Attorney Ben Schwartz answers a question from his son, Charlie. Charlie would like to know...How much does it cost to hire a personal injury lawyer? https://youtu.be/2tH39M_JoAg Hey folks, I’m Attorney Ben Schwartz, Today I have a special guest, this is my son Charlie Schwartz....

END_OF_DOCUMENT_TOKEN_TO_BE_REPLACED

Can You Have A Case For An Injury Made Worse By A Car Accident?

Personal Injury Attorney Ben Schwartz explains how you can have a prior injury but the pain or symptoms of that injury are worse by a car accident it may be a legitimate personal injury case. https://youtu.be/-8wWd_t7hCI Hi, I’m Attorney Ben Schwartz, Today we are going to take a viewer question...

END_OF_DOCUMENT_TOKEN_TO_BE_REPLACED
← Prev: Pressure Sores...Is that something I can Sue For? No Insurance...How Do I Pay For My Surgery? →